… the weirdest person I know …

… that’s me, a dreamer. Dreams re-appear, like a déjà vu. A trick of light will superimpose an image on a scene gleaned in passing. Or a sound, a name, a number, a movement, colour or scent may link up to a dream’s mood. Similarly, memories of seemingly unrelated events from years ago can pop up while doing mundane tasks. This reminiscing improves for me as I grow wiser (older,) a subtle re-organising of events.

One morning after the recent dark moon, and the solstice, while staring vacantly into the sky, a dream image returned from the blue – an empty studio space with interlocking rooms – the sun streams in, dappled light dances across pale shades of colour peeling from the walls, a space for friends to meet, play – bursting with intense creativity. There was a hint of nostalgia (I initiated like spaces in the past) and grief over not having access to such a creative hub. Grief aside, a sense of potential remained.

Consequently, I finally opened my ‘Shaper’ MS again and got stuck into editing, this after many months of having lost faith that what pours from my mind in terms of stories will be appreciated by anyone. 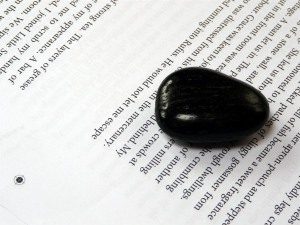 With little chance of publication, giving this sequel once more editing time seems irrational; then again, I’m the weirdest person I know. The irrational has always impelled me forward from deep states of being, in search of wholeness. Like some writers, I juggle for rhythm and balance with a multitude inside, until a character, a theme, or a poem persists and generates engagement.

In this way Ana, Cara and Mesa came to be – three stories that comprise the odyssey of three soul sisters across time.

Even when it comes to my posts here, I don’t plot, nor aim to be topical. Every day brings new thoughts and connections, while something incubates in want of wings. The process of information weaving continues during sleep, and dreams bring home glimpses of this process.

‘Shapers’ was already complete when I published Course of Mirrors. Both my beta readers/editors love this sequel, even after several rounds of reading, which is encouraging.

Yesterday I came upon a note from one of my readers with a plea – make Ana real, please.

I scratched my head, giggling about the irony, since Anna’s quest is in search of the real. How to explain what is mysterious? The paragraph my reader, Susan, referred to does need adjusting, to avoid confusion. Myth or not, Ana’s story is Cara’s deeply meaningful and internal truth.

Maybe this is the time to add, my felt sense of reality was confirmed by the innovating ideas of modern physics, quantum potential being one such case. A friend, Rob, reminded me of this yesterday when he forwarded a wonderful video about David Bohm. Please watch the film. It sheds light on my fascination with time, and also poignantly illustrates how innovators of new ideas were /are blocked by the establishment.

In Shapers time moves back and forward and often becomes simultaneous. Both Ana and Mesa meet up with Cara, the suspended story teller.

Like me, Cara feels most at home on bridges. Anyway, why am I writing this post? To give thanks to a dream that drew me back into editing ‘Shapers,’ irrespective of outcome.

… the film Albatross – elegy to beauty & grief for love lost … 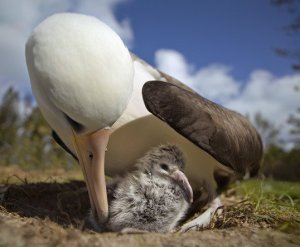 Truly witnessing the tragedies on our planet is not the same as passive looking,  witnessing expands and transforms consciousness. As an individual I feel helpless, unable to solve the overwhelming problems, but by witnessing and accepting the sad truth of what is happening, and by grieving the losses, I, each of us, in a small way, can contribute towards a necessary and crucial paradigm shift.

Chris Jordan’s film about the Albatross, a labour of love that took eight years of intense collaborations – is a gift to the world, free to watch or download.

When you find a quiet hour, click here to watch the film.

The unusual documentary reveals stunningly beautiful, poignant and intimate openings into the life of these ancient bird families. The spellbinding scenes, shot on the lone Pacific island of Midway halfway between America and Asia, touches way, way deeper into our psyche than any factual or statistical report about the insanity of our throwaway cultures could ever do.

It is a meditation on love. And the soundtrack is an art in itself.

The birds mate for life (up to 60 years) and their mating dance, filmed in slow motion that reaches into the reality of their time, shows a mirroring ritual of sheer poetry, of a grace that sweetly chimes in our deepest cellular being. Once the egg arrives, the parents take turns to keep it warm and, with endless patience, guard the chick’s struggle as it squeezes itself out from the hard shell. It’s a tough and drawn-out entry, but help would not be helpful, since the little one’s birth-struggle develops the resilience needed for survival.

What made the stunning images possible is that these majestic animals have not learned to fear humans, whose latest habits hasten their demise. Without natural enemies, they trust life, and the ocean, which offered them food for millennia, even though it now includes plastic tidbits that spell their demise.

Some scenes near the end of the film bring home powerful metaphors – like what it takes to fly. Fledglings, to lighten their weight, must empty their stomachs of everything fed to them by their parents (in this instant plastic.) Mothers, forgive yourselves. We can hardly avoid dumping stuff on your offspring, be it psychic or material. Many fledglings don’t manage, but if lucky, and if the right wind comes along, their wings will carry them across the sea towards their adult adventure.

Click here to find out about the story behind the film.

I had various pets I cared for as a child, among them talking parakeets, hedgehogs, crows, snakes, mice, and dogs – but never cats. Actually I wanted a horse, but it never happened. 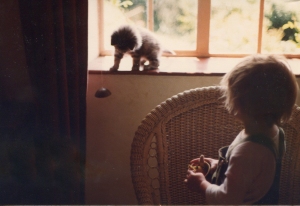 Then came Somerset, and I thought my young son would enjoy a cat. He did.

We called her Suzuki. I must have been into Zen … ‘Enjoy your problems’ – that kind of thing. 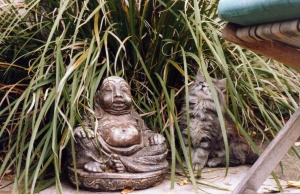 As you can see, Suzuki had leanings to our stone ‘Budai,’ drawn to its lucky charm and its loving nature, easing her through tough moments … as you can also see.

To catch mice in the ancient cottage we lived in was beneath her. She gifted us with other creatures. One summer, after returning from a trip, during which time our kind neighbour fed Suzuki, the wool fleece rug in our bedroom looked at first pristine and welcoming, but the moment my bare feet stepped on it my legs were jumped upon by armies of tiny, shiny armoured flees. Par chance I spotted a pack of post-it-notes on a Chester drawer and an ‘aha’ moment occured. I peeled off the pests amass from my skin with the sticky stripes, stomping about for a while, so none should be left out. I recommend sticky stuff for emergencies; it works, among other tricks I soon learned about.

Then came a time when we moved from home to home while in transit towards Surrey. In one such charmed place Suzuki distinguished herself as baby rabbit catcher. Never a killer, she plonked the fluffy bundles on the living room floor, where they sat, stunned and motionless … there you are, a present … We freed the bunny back into the neglected orchard of the property, but it soon returned, carried gently at the scruff of its neck by Suzuki. This happened innumerable times, likely with the same bunny, over and over. I wondered whether it was born into the wrong body, and was truly a cat – or our spayed cat was truly a rabbit in want of babies. We’ll never know. Unsure where we would end up, we left beautiful Suzuki with a woman who adored her. My son was upset, and only partly reconciled by a teddy friend.

Entering a more settled phase in Surrey, we adopted a ginger rescue cat, Caspar, who appeared dour and joyless, most likely due to distressing experiences. My attempts to create rapport were unsuccessful. One day he simply disappeared, and I blame myself to this day. In due time, I searched and found Amber, a gorgeous tabby kitten. Slow in having her spayed, she produced offspring, giving birth in the living room, an unexpected and magical event, while I had friends over. The three in the litter were very different, in looks and temperament. The first and last born kittens found homes. 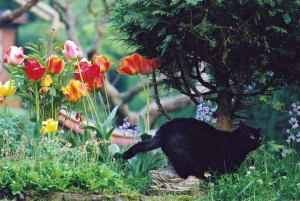 My son thought it best to let the children, accompanied by their parents, choose, so we ended up with the middle born, sleek, black, and with a lovely tranquil nature. We named her Jetty. I linked with her in grief when Amber was sadly run over in the street a few years on.

Jetty lived to be 16. She died on my birthday a few years back. When Katia, a writer friend, posted her experiences with cats  –  it saddened me to hear the story of the sudden demise of her companion. Genie reminded me of Jetty, which sparked this post, in honour of her friendship.

How to describe the deep bond we can form with an animal? Is it our need for acceptance, totally reciprocated from a creature that has all its needs for shelter, food and attention met? I think that’s a flatlander’s view. All meaningful connections happen beyond rational thought, in other spheres. Animals are sensitive to vibrations beyond our clock time awareness, often knowing of events before they happen, which is why they can warn and protect us. And because their senses are wide open to fine energies, as well as vulnerable to harmful ones, we, too, are moved to protect them.

We humans are urged to be clever and become quickly absorbed in the ongoing evolution of the rational mind. Animals can teach us to stay closer to nature, the most powerful text of life. And they maintain a strong link to dimensions we frequently lose, where all experiences mingle in the ever expanding pool of universal consciousness. With all our specialness, nature is indispensable to us. An animal friend whose intelligence detects moods and intentions, cats are particlularly good at this, can show us any moment, as in a mirror, our true state of being.

“That’s the great secret of creativity. You treat ideas like cats: you make them follow you.” – Ray Bradbury – Zen in the Art of Writing

“I love cats because I enjoy my home; and little by little, they become its visible soul.” – Jean Cocteau