This autumn is drunk with colours and fruit. Red-blushed, in their own sweet time, apples have been falling with soft thuds onto the dewy lawn for weeks. Each morning they blink at me, and shout – help, pick me up, the slugs are coming. They’re good for something, but did you know that slugs and snails are hermaphrodite, and lay up to 500 eggs a season? Re: fruit, after last year’s poor crop, this year’s harvest is a tad overwhelming. The scale by which nature balances excesses evades rational comprehension. 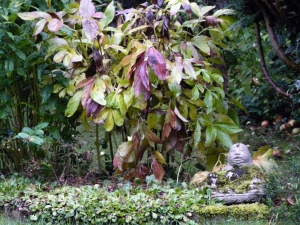 Too much of a good thing brings obligations. Eaters taste best when fresh, so I’m urged to act fast. Slug-nibbled and bruised fruit lands on the compost heap. The bulk of apples, several kilos a day, I wash, dry, box and put out on the road for passers-by, mainly kids on their way home from school. This time-consuming and noble deed has left me exhausted, and with numerous bumps on my head. Here’s the apple saint, drop now. For lack of a resident family to boss into cider-making, I’m left with ‘waste not’ ringing in my ears. If you remember scarcity, you’ll co-suffer the enforced hypocrisy of a  twenty-first-century system that thrives on waste.

I could blame the nagging ‘waste-not‘ guilt for frustrating the flow of my writing. I could blame three early morning trips to London on crowded trains, or  alien dust settling on my skin … whatever …  my body succumbed to the annual purge of flu. So a week ago I sneezed and coughed through fever and chills. Sweaty nights occasioned surreal dreams and visions, and there were days when I lost faith in my invulnerability, reminded that I need to clarify some matters in my Will. I survived – with tons of lemons. You’ve guessed by now that I’m shy of conventional medics, a story I won’t regale you with. The last official need for a doctor’s visit to my home was benign, and over three decades ago,  after I’d given birth to a healthy baby in deepest rural Somerset.

So last Sunday, following a week of altered states, I ventured out to put petrol in my car. I support small enterprises for their human idiosyncrasies. The cashier gazed absent-mindedly over the forecourt and across the street towards a line of taxies, while automatically debiting my Visa and, at my want, pressing another button to produce a tax receipt. Sensing a process at work, I said, ‘You’re bored.’

His head moved independently from his neck. You may remember the craze of bubble-head mascots:  http://en.wikipedia.org/wiki/Bobblehead that’s exactly how his head moved while his eyes rolled in their sockets to take note of my witnessing. His mouth then rounded and huffed before emitting a speech he must have rehearsed all morning. Slow, precise thoughts poured out, including snippets of existential dialogues he had had with taxi drivers from across the road. Written down, it could have edged itself towards some literary prize. His exposition ended with : ‘Nothing to be done. I’m bored stiff.’ Reminiscent of Beckett. Promises, waiting … in tune with my dull-witted flu-states. Missing most words, I was captivated by the man’s brilliant and spooky slaying of meaning. Another customer entered the cubicle. On leaving, some wise-crack in me I’ve no control over, said, ‘You’re reading …’ thinking, you’re observing life  from a distance, co-creating  its absurdities and joys. It’s what writers do.

‘Boredom is the dream bird that hatches the egg of experience. A rustling in the leaves drives him away.’   –  Walter Benjamin.

This post was meant to be short and about my son and his partner, to brag a little. 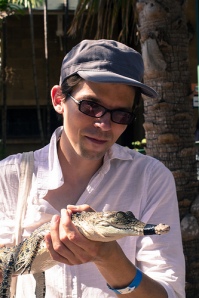 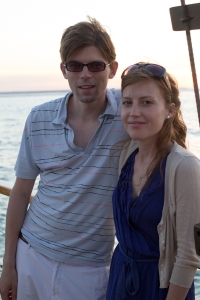 They were engaged this year and their August journey to Australia had been a reconnaissance for their wedding plans next July, organised by Natasha’s family, who live in Darwin and Perth.

I asked if I could share a few images from their trip. Yesh and Tash have featured on my blog before, indirectly. You’ll find them, for example, under ‘Inspiration’ or ‘Story of an Animation.’ They’re self-employed and work extremely hard, like many young people in super-expensive London, to make a living. They’re lucky being able to do creative and fulfilling work.

I’ve not been to Australia, and am now looking forward to this journey – you can see why. 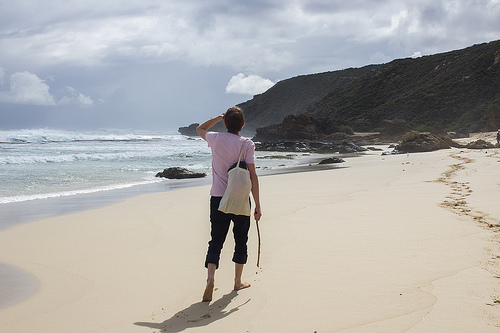 I want to tell you about a friend and writer – Malcolm Stewart – Initially a priest, Malcolm’s life sparkles with many roles – poet, singer-songwriter, editor, book jacket designer, cartoonist, BBC and ITV producer, UN project coordinator, NGO relief-aid and refugee organiser, artist, stained glass designer, lecturer and writer, friend, husband and father to 5 children … He is now in his 70s and lives with his wife, Nora, in Surrey. The Maze below is one of his many designs waiting to be collated and shared. 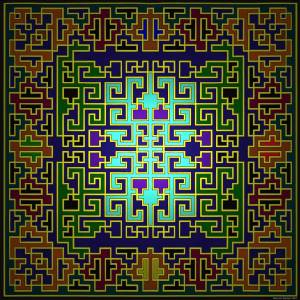 Having published Patterns of Eternity, of which more later, Malcolm wrote a second book, Symbols of Eternity. In the process of delivering the manuscript to his publisher, Floris Books, in March 2011, Malcolm suffered a stroke, which deeply shocked his family and friends.

He consequently lingered in a coma – drifting in and out of consciousness over a period of 5 weeks. Helped by the extraordinary determination of his wife, Nora, intense rehabilitation, the healing skills of friends, and the prayers of many, Malcolm gradually recovered speech and movement. During 2012/13 he improved in leaps and bounds. He now walks several miles a day, is his old delightful conversationalist, and has made friends with his computer again. He is working on another book, Light of Eternity (landmarks of a soul’s journey) and, in addition, is completing a novel he had kept hidden in drawers for years – Dictionary of Amazement. 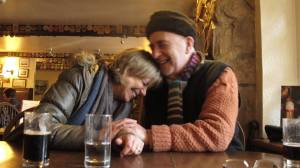 We met up last week, and I asked him to sum up Dictionary of Amazement in a single sentence (a question I dread when it comes to my own novels.) His face lit up – A Tall Story – he said. It was one of those moments when you can hear the angels clapping. He read me the first chapter from the screen of his computer, and I can’t wait to read more.

Malcolm’s work inspires me. Even as a child I was in awe of music, forms and patterns in nature, proportions in art and architecture, the cosmos … and though I remained shy of mathematics, I recall my joy on discovering that all these manifestations could be based on mathematical principles of numbers made visible through geometric shapes, revealing a golden mean that pervades all systems. As I see it, evolution is the adventure of discovering the intersections from which new forms forever develop. Or, to re-appropriate the line of a poem by John Masefield I came across the other day (through Brain Pickings) … the mind re-members the beauty of fire from the beauty of embers … 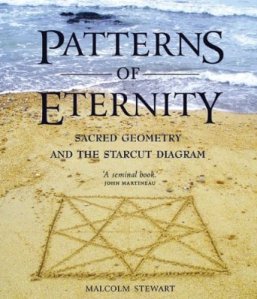 At intervals to writing this, I was dashing into the kitchen to check on the setting point of my Damson jam, which requires a fine knack of proportions – fruit, sugar, lemon, a little water. We’re all born with a knack for proportions – though this tends to get obscured by an education that tips the scale of balance by valuing quantity over quality.

While much has been written on sacred geometry, Malcolm’s book is unusual. Not only does it welcome lay persons, like me, and entertain with rare, charming stories, and sumptuous illustrations, it also presents a simple device of great significance, the Starcut Diagram.

An excerpt of my review: … The Star Cut Diagram introduced by Malcolm Stewart is an eye-opener in that it sheds light on one of the simplest and earliest geometric construction known, which he suspects pre-dates Euclid by thousands of years, a mnemonic device, and the template of many significant patterns throughout history and across the world … in architecture, art, rituals … a way of seeing and connecting things up.

Here a few themes from the book …

Chapter 8, The Hidden Geometry of The Divine Raphael. This chapter made me realise why Raphael’s paintings are so appealing. Malcolm first noticed the geometry in his painting The Transformation, which perfectly fitted the boundary rectangle of two circles interlocking as a Vesica Piscis, a ration that is also the perfect 5th harmony in music, like the notes C and G played together, or in sequence. The simple 2:3 ratio, root of all this, is as harmonious to the eye as to the ear or to the mind. What fascinates is how the directional gaze of the characters in the painting brings meaning to the theme. 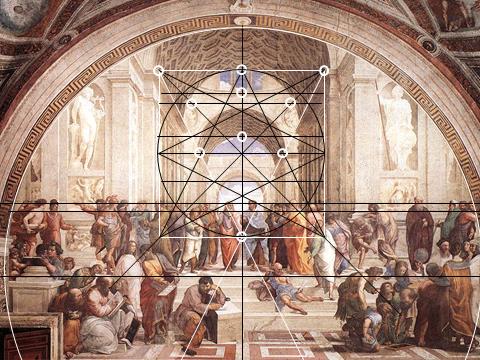 Raphael – The School of Athens

The chapter also explores Raphael’s fresco set in a semicircle, The School of Athens. In the ceiling medallion (not visible here) it says Causarum Cognito (Knowledge of Causes.) The female figure of philosophy in the medallion holds two books, one vertically, which is titled ‘Morals,’ the other horizontally, titled ‘Nature,’ resonating with the two central philosophers – where Plato points to heaven and Aristotle gestures to the earth. All the well-known philosophical figures in this stage-like painting also represent ideas, and Malcolm expands on their connections in detail, adding inspired meaning by overlaying the diagram of the Starcut.

Chapter 21, The Lyre of Apollo, applies the Starcut diagram to architectural spaces and relates to vibrations and resonances. Images show samples of standing waves created by sound within different elements. And the tonal vibrations of the human voice are discussed, like Psalm singing, the reciting of Indian puja, Sufi Zikhr, Buddhist sutra chanting or mantra. Practising this kind of tuning in groups (as I experienced) powerfully tunes mind and body. The chapter goes on to elaborate on the length, tension and ratio of musical strings, using once more the Starcut diagram to show the consistent harmony of numbers, and the hidden one that remains quiet. 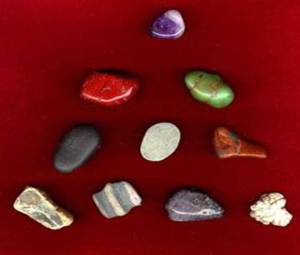 By bringing light and clarity to simple forms, with beautiful illustrations, the materials presented throughout the 25 chapters convey a deep intuitive connectedness, which makes this book a joy to explore.

A surprise at the end of the book introduces 5 Starcut Glass Bead games, not featured here.

You can listen to Malcolm reading a little from Patterns of Eternity on yourtube http://www.youtube.com/watch?v=-N8QiyJU_SY

Dip into it at Amazon – PATTERNS OF ETERNITY  http://www.amazon.co.uk/Patterns-Eternity-Geometry-Starcut-Diagram/dp/0863157122/ref=cm_cr_pr_pb_i

And also look at SYMBOLS OF ETERNITY   http://www.amazon.co.uk/Symbols-Eternity-Landmarks-Soul-Journey/dp/0863158374/ref=pd_sim_b_2