A tile made for me by E. Cordier for photos in his studio.

In a previous post I mentioned my erratic filing, which, when working on a writing project, results in phases of strolling through my inner jungle in search of a spot marked for attention, often years back, or wandering through a library in a kind of trance, ignoring categories, with only a vague sense of purpose. On route, I explore seemingly unrelated and often incongruous themes, before a match creates coherence in a new context.

While searching for an invisible gestalt, I tend to reread authors that inspired me. Last week it was Six Memos for the next Millennium, by Italo Calvino (translated by Patrick Creagh.) Like him, I’m all for the shared magical. His Memos are lectures he prepared during 1984 for presentation at Harvard University. It was the year when computers moved into our lives. Maybe he was concerned about Orwell’s dystopian Newspeak being just around the corner. In any case, it made Calvino reflect on a set of literary values. His sudden death meant he never presented these lectures, and only five Memos made it later into print:  Lightness – Quickness – Exactitude – Visibility and Multiplicity … keywords, expanding on ways we perceive.

Though it’s a small volume, the material is too rich and diverse for my humble post. Still, I want to share a few quotes and reflections from re-reading the chapter on visibility. Calvino wrote …

… For successful imagery, writers must do two things: convert the visuals of the mind into words, and at the same time make sure that the words are so well-crafted that when read, the reader can instantly visualise every setting, every character, every chosen detail as if they were looking at it directly, and not at a page. It’s a deliberate process, this transmogrifying from image to text and back to image ….

He describes the progression … something that is painstaking but not necessarily painful, from the moment you grasp the significance of a single image and then associate it with other images, forming a field of analogies, symmetries and confrontations, and then organising this material, which is no longer purely visual but also conceptual, to try and give order and sense to the development of a story. Here the writing, the textual product, becomes increasingly important. From the moment you start putting black onto white what really matters is the written word, first as a search for an equivalent of the visual image, then as a coherent expansion of the initial stylistic direction, so that eventually it is the image that is being pulled along by the text, and not the other way around …

My poems, and certainly my first novel, started with a spark, a solitary image, like a cypher compelling me to uncover its meaning. An unfolding message can be drowned or crowned. Writing (like any creation energised by passion and craft) occasionally achieves such a finely tuned nuance that an invisible quality resonates deeply through the visible.

During my recent reading of Calvino’s chapter on visibility I recalled my entry into black and white photographic processing, which, before digital technology, happened in the darkroom  … to start with, in complete darkness, with the celluloid film being developed in a chemical bath, regularly shaken, like the preparation of a homeopathic tincture, then rinsed and fixed in another bath, rinsed again and dried. Creating prints is the next stage, for which red light is allowed. The negative is placed into the enlarger, from where it is projected through a lens with a sharp beam of measured light onto a light-sensitised sheet beneath. Correct duration of the beam results in a positive print that, at best, develops very slowly in a tray of chemical developer.

Watching the print of a well exposed negative emerge under the red light has always given me enormous pleasure. Like a dream emerging from the unconscious and becoming visible.

The image first appears as a sketch, until grey and dark tones assume saturation, ideally without losing highlights. Once perfection is achieved, the print is shortly rinsed and transported into the fixation bath for a while. Only then is it safe to introduce daylight, for further rinsing and drying of the print on a hot press. 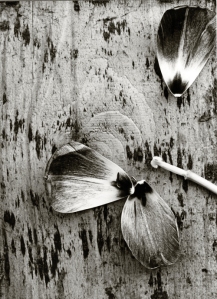 No doubt the experience of a slowly developing image in the darkroom influenced my writing. A sketch to start with, suggesting a mood, a lightness of touch, and, with some stroke of luck, an emerging symbolic element, which black & white photography is particularly well suited for. In short, a feast for the imagination, inviting associations for … poems, stories, and even cosmologies.

Are you a visual writer – in Calvino’s sense? Do you bring vision into focus with your eyes shut? Do you use images to think, and words to imagine what never existed? 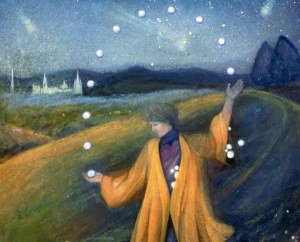 ‘The Magician,’ a painting by Silvia Pastore

Ambiguity is my name. I’m burdened or blessed with a self-reliant streak. Major decisions in my life were made intuitively, magically, spontaneously. I tend to escape the tedium of – must – have to – social coercion – small mindedness, and the like, via stretches of doubt, waiting for the sixth sense and moments of clarity to kick in.  You guess right, I dislike rigid structures, uniformity and over regulations that kill creativity. I juggle for authenticity. A glimpse into the psychology of this stance appears in this post from 2012 – the wild horse of the mind,  but possibly rebels are simply born with a disposition to serve social balance and individual autonomy.

I climbed into the plum tree and ate the grapes I found there. The owner of the garden called to me, ‘Why are you eating my walnuts?’    …  Yunus Emre

My son ordering my stone collection …

There is beauty in order and certainty.

There is beauty in chaos and uncertainty. 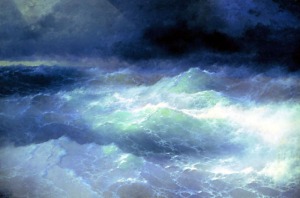 Ivan Aivazkovsky – Between the Waves

Life serves up both, be it in slow motion or in rapid succession.

From the tension between order and chaos springs creativity.

To strike a balance is becoming difficult. Scientists, today’s explorers, provide useful facts that endlessly improve our lives, bless them, but unlike individuals and small businesses, they can indulge in mistakes, because science funding continuous even when facts prove wrong and change, because it aids the economy. To use a quaint example, one moment coffee is said to kill us, next it is lauded as beneficial. The list of contradictions is endless, and amusing. Statistics, as expedient as they are, skip the varied metabolisms of individuals, the whim and wisdom of the body. Some bad stuff, in moderation, actually maintains the body/mind equilibrium. And there are the cosmic and psychic weather changes we have no control over that affect individual moods and attitudes. In short, the tyranny of algorithms that dictate what is good for us can be counterproductive.

Since having taken the risk of making time for writing, with less duties and roles to consider, I’m tolerant of disorder. My personal erratic filing, analogue or digital, starts out well, but as data builds up, valuable notes, articles and images sit unattended and unconnected, until I vaguely remember an item that might fit a present concern. It takes a day or two day fretting over, but if I open the question as to the whereabouts of particular information in the Noosphere  my brain eventually makes the connection and goes ‘ping.’

I prefer this disorderly memory system. It liberates and enables me to switch off  ‘overwhelmed,’ providing a descent amount of inner peace.

John Keats (in 1817) coined the term negative capability for his preference of intuition and uncertainty above reason and knowledge. His definition chimes, though for me, ‘living the mystery’ sums it up better.

Writing from intuition resulted in my first novel, ‘Course of Mirrors, continued with a sequel venturing into SF, and a third book. There was no plan, only an initial image. From there on the characters created their world. My personal myth added spice and deepened the narrative, making it universally relevant.

I write for the pleasure of sharing the diverse experiences of my personal myth. My gut feeling tells me we need more living and writing through mystery.