Course of Mirrors was published on 28th April 2017 through Matador/Troubador as paperback and in e-book formats. Matador/Troubador will hold an initial print run, enabling bookstores to stock copies. Reviews can be left on my author page without signing in, though they will take a few hours to show up.

Paperback and e-book formats of Course of Mirrors  are also available through other outlets, including Amazon , with some interesting five star reviews. In case you read and enjoy the novel please leave a review on amazon, which will make the book more visible.

Baba gazed right through me with a solemn air. ‘We must never give up our search for The Real,’ she said.

After years of isolation, due to a pandemic, and the grinding down of her confidence through the inexplicable rift between her parents’, 19-year-old Ana is empowered by a numinous experience and a miraculous stone.

… Everything around me shimmered from within itself. I was bridge, river, riverbed and water falling from the cliff, the aria of water. I was air, breeze and water dust rising. I was mirror to mirrors yet looked from beyond mirrors. Behind my eyes a truth flashed …

Ana follows the Gazal River to find her soul-sister, Cara, whose parallel existence in the twentieth-century foreshadows their paths’ alignment in the West. A confidential letter from her Baba (Gran) for the King of Itaka burdens Ana’s journey with secrecy. Initially in gender disguise, she travels between her parents’ contrasting realms across dangerous bridges, battles her worst fears, and finds her gift. Among a group of artisans she meets Luke, twin to a sinister maverick, neither of whom is aware of the other’s existence or their true parentage. As the brothers fight over her and betrayals unravel in Itaka, Ana’s deeper quest begins. 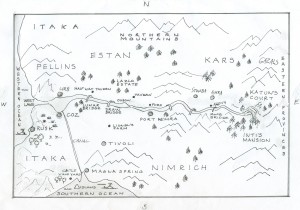 Course of Mirrors has won a gold medal on the Harper Collins Authonomy writers site through reaching the editors desk before the site closed. The story received excellent feedback, with over 900 comments, all positive and encouraging.

What’s the book about?

I’ll attempt to give a few hints, though I may have different words tomorrow:

Course of Mirrors stands on its own, but there will be a sequel, Shapers, where it becomes apparent that Cara penned Ana’s story as her myth. Events stretch from 1970s Ireland to Rhonda, a culture centuries ahead in time when the expression of feelings is outlawed and compensated for by augmented reality (RA) citizens immerse themselves in. Shapers are mystical scientists who designed a new species. They live underground and are tolerated as long as they keep out of politics. One of the Shaper’s species, Mesa, returns from a far future to re-capture her tribe’s history. Characters from Ana’s myth reappear with resonating psychological patterns.

A third book is in progress, concluding the trilogy of a triple soul.

A few comments from readers who read draft chapters of Course of Mirrors:

… Exquisite imagery and beautiful lyrical writing that flows with the sparkle and dance of a mountain stream. The narrative weaves the story like a tapestry of jewel-rich colours and precious metal threads. Ana’s world is a place of enchantment and dark mystery and yet totally believable … just gorgeous in every way …

Course of Mirrors is a book sizzling with original ideas and stunning descriptions. You have a high cast list but you have made the characters individual – on a full reading of the first three chapters, the last two and dips in between – with shifting, developing, realistic relationships and endless excitement. … an excellent story, exceptionally well written.

… It’s been a long time since I have been able to settle into any new fiction. So it’s a rare feat that Ashen’s novel has been able to perform on me …

Once in the greatest while, I come upon a novel that would be proud to have written.
Your work is among those last few. As one who sojourns often in the metataxis between what we foolishly call reality and the greater realm that has no name, I am very moved to come upon your story. It deserves not just to be published, but to be remembered and cherished for many generations.

James David Audlin, author of ‘Circle of Life,’ and ‘Rats Live on no Evil Star.’

I am blown away! WOW! This is amazing and I haven’t even had a chance to read that far! Trust me, I’m not going to stop till I reach the end. Drawn in from the first line, I could actually imagine myself standing alongside Ananda as her belongings went up in smoke. Beautiful.
Your imagery and descriptive tone are so wonderfully detailed and intricate. I love the idea of Cara being a ‘Soul-sister’ for Ananda and the mirroring between the two worlds is just mesmerizing and so original.

In the past my poems appeared in anthologies, and I self-published 2 collections.  Here are more recent publications  I had a part in

A unique project that originated online among poets on the Harper Collins authonomy site, instigated by Zan McDowell. See links under blogroll

Global Writers in aid of Japan after the tsunami. Link under blogroll.

RIVER IN THE HEART

A CD of poems recorded together with Evlynn (Zohra) Sharp, and friends.

HEART OF A SUFI

During 2010 I co-edited a book published by archventures that contains stories and reflections on a unique Sufi teacher. Look up reviews for  Heart of a Sufi:

More feedback here, and a look inside of the book – Heart of a Sufi org