… story of an animation …

Young people are an inspiration. Today it’s my pleasure to introduce Natasha Tonkin, pandahorse.com – a superb animation director (and my son’s partner.) Two years ago I wrote about a fun-workshop they offered with a bunch of friends – you can find it by clicking the inspiration in the top bar.

I asked Natasha to share a little about the making of her latest project. My writer friends here will find that some of the methods she describes below can equally apply to the planning of a novel, and the exploration of characters.

Work started mid-February, after the final animatic (a timed moving storyboard) had been approved by the client. CycleCities can be seen at http://vimeo.com/66410099

The enchanting film is under 4 minutes and required thousands of hand-rendered drawings, at 25 frames per second. This labour intensive and time-consuming process calls for a precision and economy that is different to film, where unnecessary shots are cut during editing.

Natasha says: Planning was essential. Storyboarding determines timing and action and allows me to visualise the whole film. It is my absolute blueprint, kept by my side at all times, or otherwise seared into my brain by constant referencing. I look back now at the animatic and it is almost spot-on with the timings of the final film. 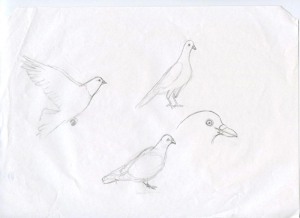 The task at hand was to create a short animation that would endear a European audience to the benefits of cycling. A humorous’ story that linked together the identified benefits of cycling: re: health, economy, convenience and environment. Since the animation had to appeal to audiences across European boundaries, it had to be without spoken or written language, (unless we wanted to translate it x times) but with visual cues and body language understood throughout Europe.

The many aspects to consider were a little overwhelming at first, but we discovered subtle way, such as the green trees popping up at the end, and changing the lead character’s (George) clothing and giving him a smile to indicate health. Yeshen and I spent a week tossing and turning over different ideas and scenarios. We weren’t afraid to tell each other when an idea was bad, because very often you can convince yourself that an idea is fantastic, when in reality it’s clichéd or just plain boring. I did a lot of sketches, refining the characters alongside the development of the story.

Sketching out the rough movements based on the storyboard sequence calls for keen observations. Sometimes it proves difficult to come up with right gesture, the one that flows. When I forgot what a hand looks like from a certain point of view, I asked my partner (Yeshen Venema) to pose for me – he was a fantastic model.

Occasionally I filmed myself acting out movements and poses – useful, since feeling the pose resulted in much better drawings and movements!

When the rough movements were down I did a line test, watching a playback on the computer, or using my eye to judge the flow by flicking and flipping the pages, like you do with a flip-book.

Once happy with the movement, I refined the drawing and used a rotring pen to create an outline. I’d then scan in each page, clean up and colour them with an image editing programme. Yeshen helped between his photo-shoot-assignments.

He was my saving grace. Since he was less attached to the drawings he treated them in a less pedantic way. By the end we had refined our colouring processes to almost 50% less time than when we first started. Colouring can be very boring so we were constantly figuring out ways to shorten the steps. It was during these times that we used podcasts to keep us sane!

Once each animated sequence was coloured, I would swiftly compose them into separate scenes and, one by one, watch each scene come alive. Watching successful sequences and scenes come to life is very rewarding and makes you excited to go onto the next scene. It’s this constant input and feedback process that keeps the excitement and the desire to finish the film alive.

More about the writing

I had sketched thumbnails and imagined the story visually. From there we wrote short narratives (approx. 2 pages) setting the scene, describing the events of the film, the character’s actions and reactions and camera moves. In a nutshell, our story followed the life of an unhealthy man, hypnotised by his routine, who drives to work alone each day wasting time and money. He realises what’s wrong and finds the will to change his car into a bike. As he joins other happy cyclists he kicks off a chain reaction among other car users.

The lead character was designed as an Everyman who could come from any of the partner cities – Piraeus, Lisbon, Genoa, Gorenska, Gdansk, Leipzig or London. Middle-aged, slightly overweight, average job, he’s soft, rounded and likeable. We saw this type as one of the hardest to create. We hope he will be an inspiration to others. Everyone has a family member, friend or work colleague similar to this chap – so we felt he would be easy to relate to.

I worked with a very talented composer, Robert Ashbridge  http://www.robertashbridge.co.uk who composed and recorded the original score and all sound design elements. We were communicating from early on in the process and had a meeting to discuss the animatic and how the film should feel at different points. Music is very important, because it needs to accentuate the story where language can’t.

Robert started on the sound towards the final stages of the film. It gave him a bit of time to experiment and mull over ideas, and he could reference the visual quality of the film in his music and sound. We love the result.

Try watching any film without sound or music – it immediately becomes a lot less watchable. It was really satisfying listening to the music and sound in the final stages, and helped us push through the many long and painful 12-14 hour days trying to meet the deadline.

And luckily it did get finished and officially launched on the 27th May. Despite the hard work it took to put this film together – the only 2 days off were when we visited Yeshen’s mum over Easter! – it was a joy to work on, and Robert, Yeshen and myself are all very proud and pleased with the results.