21st Dec,. 2007. Ulla and I head to Tiznit, and on to Playa Aglou, where I book into a hotel at the beach for two nights at reduced price. I sleep well after two glasses of red from the bottle I brought along from Agadir. We have a morning walk under spectacular skies along the coast.

Here happens the image for the title of my novel, ‘Course of Mirrors,’ with clouds brilliantly reflecting on the water. The dogs race on the moist sand. Late afternoon it rains a little. Next day we make a short trip south, exploring hidden bays with otherworldly rocks. 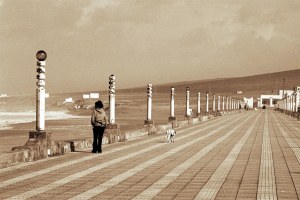 22nd Dec. We go shopping in Tiznit, for candles, water, yogurt and postcards. The souk is empty, maybe because of the holiday. Afternoon we walk along the coast, with two, three, four bands of surf under a misty sunset with pink clouds, and also stroll along Aglou promenade.  We contemplate renting a flat for a few days. A Moroccan scout suggests a few, but they’re all in a dire state … half functioning appliances, smelly and dirty, nothing that couldn’t be righted with a little effort, but we are in conflict whether to commit to one place or push on.

23d Dec. Massive rainfall, through which I run to make it dry to the breakfast terrace. The sky clears quickly. By lunchtime we drive on towards Sidi Ifni,  stopping in Mirleft for lunch. As only customers we are served like royalty.

Later on I hold my breath, while Ulla, seemingly fearless, navigates the heavy van descending a scary steep rubble track, the last stretch bringing us to the legendary Legzira beach. This heart stopping moment brings back a time when I had my own, smaller

VW bus, and got stuck ascending a vertical narrow road in the mountains of South Tirol. I was younger then, with more guts. I relied on my handbrake to exit the car and put rocks under the back tires, mainly to gain time and catch my breath. In the end you do what needs doing. Once you’re on a sheer slope you keep your nerve. Gliders have most excellent nerves around here and, for us, Legzira’s red rocks were well worth the  effort.

Sidi Ifni was relinquished back to Morocco by Spain in 1969. The beach is massively dirty, yet overall the place has an odd charm, and seems to have escaped mass tourism.

I book into Suerte Loca. It’s a full moon night. My room is shared with one lazy fly, which, in my dream, I pursue with a formidable army of girls, equipped with arrows.

The terrace with a view up the road is lovely, though it connects with three other rooms, something I feel uneasy about. There were once plans to build an airport here, but the designated area remained empty. I like this photo I managed to take. Developers overestimated Sidi Ifni’s attraction to tourists. Some months after our visit there were violent protests by the unemployed, who blockaded the port. Maybe things changed. 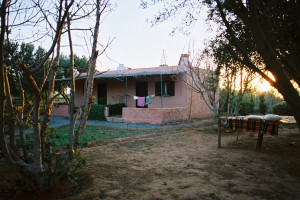 24th Dec. No tinsel or jolly Christmas bells for most Moroccans. French people living in Morocco tend to spread the tradition, though not in the Oasis where we arrive today. Domain Khattab has camping facilities and a few small bungalows, all set in a desolate landscape not far from Goulimine, the gateway to the desert. I rent a little bungalow. Before bedtime Ulla serves a vegetable stew done on her camping stove. We share reminiscences. Happy Christmas, I say, with some irony. Ulla believes in nothing, and why not. Traditions that lose symbolic value degenerate. When I think of how Christmases have changed since my childhood, I despair at the monster enterprise it now stands for. It is bitter cold, hard to sleep, even under several layers of blankets. Dogs are barking on and off during the night. The place has a filthy kind of allure. Only a trickle of water in the bathroom, and the toilet doesn’t work. A helpful man brings a bucket of water, and then another for the next flush. Unfortunately the toilet bowl leaks, which I discover in the morning when I step into ice cold puddles that soaks my leg warmers. Despite all these discomforts, there is something refreshingly disorientating about travelling along unknown roads.

25th Dec. Christmas day. The sun brings a little warmth. I pay what I think is sufficient for the lack of much, which is accepted. Breakfast is delayed, because someone overslept. We meet a Swedish woman who travels alone via public transport. I admire her good faith. We are off to Goulimine to get some shopping done. A young man shows me the one place that sells wine, in a dark corner of the souk. 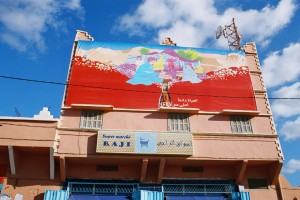 For our next destination we drive a dangerously bumpy

track to Fort Bou Jerif. The stillness among the bare hills is eerie. Not a soul for miles on end. Lost in the desert, the fort attracts visitors because of its stunning ruins. The guest quarter, including a camping area, run by French people, has a Disney feel and lacks authenticity. Only mad tourists like us attempt this arduous journey, which should require a 4×4 vehicle. The room I book is expensive, sigh, but since everything is clean and well cared for, I anticipate the unique pleasure of a hot shower. Close by is a river with a palm grove oasis. We opt for a tagine dinner in front of Ulla’s van, prepared traditionally on a wood fire by a clever trader hiding among the bushes. It tastes delicious, and we enjoy the sunset with a full moon rising. Tomorrow we’ll explore the ruins. 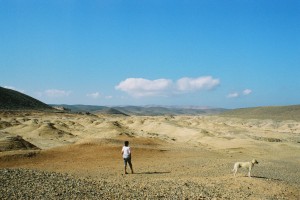 26th Dec. A fairly comfortable night, for Ulla in her van, and for me in my snug room, where I sketch some furniture details. We set out to explore the crumbling ruins. Apparently the fort was built by the French around the 1930s and abandoned once Morocco obtained its independence in 1956.

The hot shower was overstated. To safe costs, I opt for a tent for the second night, spreading a sea of tiny tea lights around me for comfort. Still, the cold prevents me from sleeping, until Ulla saves me by supplying a cashmere blanket, which I wrap around my neck. It also helps to muffle the noise of barking dogs.

Choosing images is difficult, there being so many, in different folders. I hope the ones chosen add a taste to the journey. More adventures to come, hopefully to cheer those of us in lock down.

The lone warrior at Plage Blanche, back to Goulimine, and on towards Tan Tan via Ksar Tafnidilt.

My blog host – WordPress – has a weekly photo challenge. I spotted the theme of this week in a Twitter post … ‘The Golden Hour’ … and couldn’t resist sharing some photos of from Morocco’s Atlantic coast, where I travelled with a dear friend some years ago. The photos here were taken during late afternoon, my favourite light. 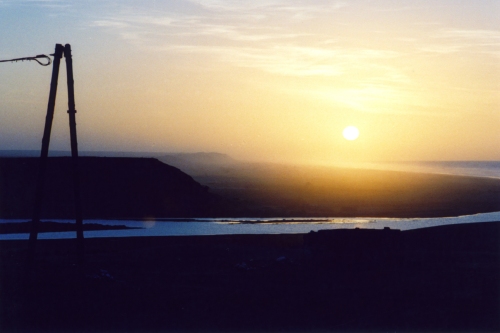 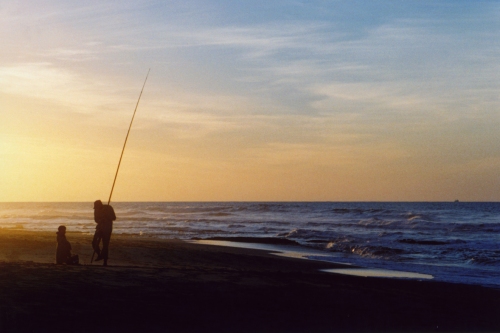 Morocco, Aglou, fisherman and his son.

Morocco, Agou, boy on the prom 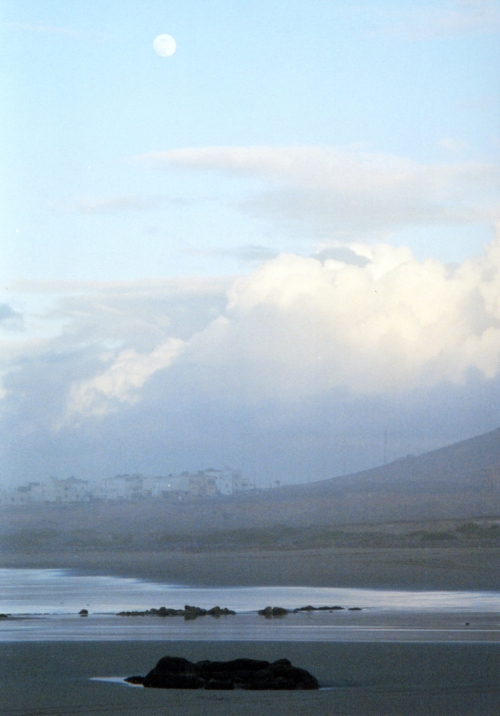 And the moon coming up over Anglou.

You can explore links to other people’s photos on the ‘Golden Hour’ theme here: