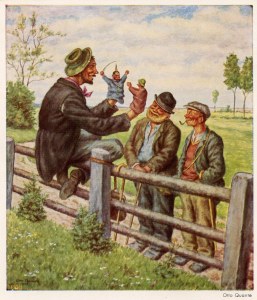 Long-festering issues are popping up in ugly shapes on our flat screens. Punch behaving disgracefully again. Policy makers had it coming. Ah, the ever irritating foibles of citizens, where resentment trumps over reason on issues which, after being hushed for stretches of time, repeatedly break into the light of reality and need to be engaged with. There is no magic knife to cut out the nasty parts, like the cancer of xenophobia, which is basically an overreaction to the fear of disorder and the slipping away of control over familiar attachments, the world over.

Science is at war with the random failures of our immune system, a war that may in future extend toward the gene-editing of troublesome feelings, equaling an attempt to not bother with the psychology of the unconscious. Please imagine what would happen, desirable as it might sound, if humans were made immune to anger and insulated from memory (a theme in the sequel to my novel ‘Course of Mirrors’) the danger being: if we close the door to one threat, we open the door to another. Medicine calls it ‘side-effects.’

What happens with social policies is no different. The debates before and after the Bretix referendum (how did such an ugly word become a brand?) leave essentials unaddressed in both camps. I have an image of a confused fleet of rudderless boats in the middle of the Channel, where the sound of – Brrrr – exxxx – ittt – is carried on the wind and presses on eardrums. The wind is useless without a rudder. Given the prevailing eccentric climate there is no knowing where the boats will end up.

I’m in such a boat, even though I have a home, a safe little shelter to feel smug in. Presently this comfort makes me feel very uncomfortable. The issues raised in the Brexit campaign are valid. They could be listened to and reasoned through towards a compromise, for the time being, since it is surreal to take the bundle of problems about broken communities, lack of housing, jobs and poor efforts of integration and blame it on people conveniently label as ‘others.’ The influx of migrants merely highlights an ever growing imbalance between have and have-nots. The world is changing faster than one generation can comprehend, despite, and also because of technological advances and instant information.

The exodus happening around the world is a global phenomenon.

People fleeing from war-zones, natural disasters and nil prospects, attracted to the seemingly coherent structures of democracies, want to re-build their existence, are mostly educated, keen to work, and are longing to regain their self-esteem. Why not focus on the opportunities in this situation? Ask how the migration phenomenon can benefit societies? And how Britain can creatively support Europe in a process that simply cannot be stopped?

Actions based on fear and denial create more fear, and will hardly generate listening, humility, or reflection – like how the meddling in the Middle East caused more harm than good, and how the experiment of democracy is just that, an experiment.

And, to my mind, the biggest question of all is: how will the overly privileged individuals and corporations of this world respond to the ever widening imbalance of riches? This can not be left to politicians, whose promises are tied to only a few years in office. Imagination and forward looking reforms are needed.