Last weekend I stepped out of my recluse bubble. It’s been a while, and I truly enjoyed a spell of rich socialising.

My editor visited and stayed over, enticing me to celebrate the release of ‘Course of Mirrors’ into the world. She brought along an excellent bottle of sparkle. I wish every writer was blessed with such a generous editor friend.

Truth be told, without Zohra’s editing support I would not have reached the confidence to publish my first novel, to continue writing a sequel and even start a third book.

Saturday’s party was to celebrate another friend’s birthday, once more with champagne, and a feast of the most delicious food, prepared by his partner, Ruthie. The afternoon was crowned by the appearance of an auspicious rainbow.

For the Sunday occasion a bunch of friends gathered in gratitude, giving honour to the memory of Rahima (Elspeth Milburn-Spottiswood) – a remarkable woman, painter, Sufi and Jungian psychotherapist. 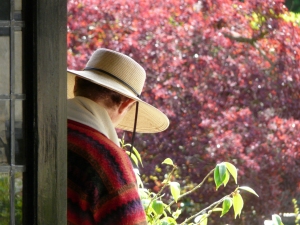 The venue was a beautiful old barn in Surrey, surrounded by green lawns and lush, colourful gardens. We listened to recordings of our friend’s resonant voice reciting poetry by D. H. Lawrence and Rumi. And we watched film clips that brought back into awareness her kindness, knowledge, and her inspirational insights during seminars on archetypes we co-facilitated for many years. Stories were told, readings were offered – and music played. Among the gathering were strangers, new contacts, friends of friends, in the way networks grow.

The sun was warm enough to have a nap on the lawn. Family members, and some of the younger generation attended the day, which was heartwarming.

Miraculously, the weekend had only the occasional short shower between long spells of sunshine, augmented by the warmth of friendships.

I feel deeply nourished, and am left with the pleasure of knowing that Course of Mirrors is now travelling across the world, and readers, some of you among them, will already be immersed in the story, and hopefully post reviews.

The light in green shoots encapsulates the weekend.

Information on my first novel is on my book page here.

… a little backstory to ‘course of mirrors’ …

When I enter the room Dot is absorbed in reading from a folder among stacks of papers stored in drawers under a bed. ‘Hey,’ she looks up, ‘this is fascinating. It’s got your name on it.’

We were clearing the main house of a workshop venue near London, a magical place I had been associated with for 30 years and which I facilitated during the winding down period of its operation, dealing with the grief of an international community, as well as managing group bookings for the remaining few months, before the estate was sold.

The folder Dot had discovered contained the beginning of a story I had drafted …  and then lost. For two action-filled decades my protagonist had lingered patiently in a corner of my mind. On that momentous spring day of clearing Ana emerged from her hibernation.

Resembling the experience of my own myth, Ana is called to her adventure by a kind of celestial twin, an agent between past and future, between dense and subtle realms.

The novel was completed five years on, much encouraged by E. Zohra Sharp, who offered her generous editing support. I also shared some chapters on the then still existing Harper Collins Authonomy site, where writers could give and receive feedback for work in progress, and have great fun with trolls.

In 2011 another project took priority for a few months, Heart of a Sufi, which involved organising, arranging and co-editing reminiscences about a remarkable teacher who had died in 1990, much too young. He was Fazal Inayat-Khan, aka Frank Kevlin, the grandson of Hazrat Inayat Khan – more here.

The same year, not wanting to become a writing recluse, I started this blog. Through a poet I met online, Course of Mirrors found a small publisher who loved the story, which perked my confidence. Three years passed without action – a long time when you are not getting any younger. During  the long wait, I did however write a time-travelling sequel and started a third book. Not keen to endure more agonising delays, I decided to self-publish.

In charge of the process, I had to make decision after decision, aided by a competent team at Troubador and my proof readers, Zohra and Susanne. There will be an initial print run, enabling bookshops to stock copies. The publishing date for Course of Mirrors is April 28th, but the book information is up and orders can be taken in advance, as paperback, and soon also as e-book.

Through Troubador, where I get the best royalties

Through Amazon …  and through Waterstones

Today the dynamics of spring enchanted. I glimpsed a yellow butterfly. Sunlight, dappled by branches into a gently moving lattice, was playing on a carpet of fresh cut grass, where Robins feasted on worms. The laurel hedge glistened. A few tulips made a pink and white appearance, their leaves folded as if in prayer.

Our son was born in the Quantock Hills, and we lived there for a while, in a place where Samuel Taylor Coleridge’s poetry was inspired … that deep romantic chasm which slanted down the green hill …

England, the green and pleasant land a link with Blake’s words on screen. This older version made me smile. In case the link won’t work https://www.youtube.com/watch?v=bKaJ4b0XYmI

Green hills come with grey skies. Endless weeks of rain leave me melancholic. Then I long for sunshine & hammock days, when fragrances of jasmine and honeysuckle linger until midnight, friends gather round a fire, tea-lights twinkle in trees, a glass of wine or two, or three. This year, sunshine flips to rain almost daily,  green overwhelms as jungle that needs mowing, trimming and hedge-cutting. I’m left wondering if the rare sunny day is worth all the effort and contemplate a Mediterranean lifestyle.

Years back, after three months of filming in a desert – swift sunsets, brilliant stars, marvellous moons, scorching hot days, cool nights, stark and beautiful – I returned to a lush and sensuous Bavarian autumn – myriads of colours, the smell of moist earth, mist, the sweet water of ponds soft on my skin, different kinds of dreams – such a contrast, it made me think how powerfully our temperaments are influenced by climate and weather, in ways we experience ourselves, in ways we feel and think, in ways we express ourselves, write poetry, compose music.

Countries with balanced climate are rare, so it’s unreasonable to expect people to be balanced and temperate. And would it serve us, I wonder? Would it make us too complacent?

We’re not machines. Each of us has a unique frequency, intricately bonded and tuned with nature’s whorls and spirals in continuous movements of renewal and becoming. I concede, even a single balmy summer’s day brings a smile and restores my senses – blue flowers swaying in the breeze, reading poetry in my hammock.

So I dream of sunshine, but too zealously. As in Plato’s myth of Er,  variety and extremes seem to turn the spindle of necessity and stimulate the imagination. What we commit to in life encounters grit – stuff that grows pearls in oysters and also polishes hearts. And there is the grace of precious moments, when seasons overlap in us, when all our senses are switched on, and the young, curious self, with its eternal projection into the unknown, imagines the unimaginable …