… my love for England – and my brexasperation …

The Alps of Bavaria stand in bright glory or shrouded in mist, depending on the mood of the weather. Their snow-covered peaks were the dramatic panorama of my childhood, and called me beyond horizons, first east, then west.

Already as young woman, drawn by friends and circumstances I’ve lived and studied in England for stretches of time, until in 1979 I settled for marriage and motherhood in the hills of Somerset.

A special five year period of my life ensued, a calming respite after intense professional years, thrilling adventures and travels. The laid back ambiance of the English countryside offered precious time with my son, opportunity to grow my own food, bake my own bread and strike up tender friendships with neighbours. Our parents visited us from Holland and Germany to welcome their grandson.

My dad, who normally travelled south, couldn’t withhold his poor impressions of England at the time, gathered, it must be added, along motorways. His comments: … brown water for coffee, fatty food, filthy toilets, shoddy service, and so on … seemed to underline his disapproval of my life-choices. I told him culture thrives in cities, like London. Rural life moves in slow motion here. The home birth of our son brought the first child into this Hamlet for decades. We were novelty.

However, every small region has its old guarders kicking in when a non-local challenges the status quo. My attempt to save a small oak forest from clear felling met with some success and equal scorn. A tit-for-tat exchange of articles in the local paper was educational – if you can’t stand the heat get out of the kitchen – was the response to my well researched ‘save the oak wood’ warrior call. I countered – why not open a window. The Woodland Trust got involved, a spread in the Sunday Times followed. Politics were never my calling, but I became an activist over trees and was invited to join the local parish, all educational. A day before the clear-felling licence expired, the chainsaw echoed among the green chasms of surrounding hills.

It made my blood boil. The communities I had mobilised were only a little short of the sum arranged for a purchase of the oak wood from the greedy owner. Outsiders (migrants) tend to have a naive understanding of local power structures, but hey, they can have the guts to ask poignant questions.

The 1980’s were marked by rapid technological changes. We moved closer to London. The world was webbing up. In rural England, within a few decades, fruit meant more than apples, more than two kinds of potatoes were on offer, bread surpassed Home Pride’s white sponge, spices arrived, salads, mushrooms, avocados, berries, olive oil, proper coffee, pasta, ice cream, good wine. Books from around the world arrived, translated. Research from beyond the island enriched sciences, organisations, education, services, construction … an invasion of culture, colour, knowledge and other traditions, other, other, other … progress gripped the world … good, good, good … but, but, but – technology also steamrolled traditional jobs, pride in hard work was fading, rents and house prices soared, entrepreneurs and those already rich prospered and the rest had a hard time, some never catching up. This was – and is – not just an English trend. When change is inevitable, creative adjustments are needed.

But let’s find a scapegoat, eh?

The simple blame game is destructive for any country these days. Europe needs ingenuity. Its territory has cultural learning stored in deep roots, like the giant oak trees worth fighting for. British humour and diplomacy have much to contribute to a sustainable Europe that, nobody is arguing, must adjust.

This is my view.

Wake up Britain, and imaginatively address the global phenomenon, or, I fear, you’ll be nibbled apart by giants across the ponds.

Click here for a few practical issues re: Brexit, by Ian Dunt.

Nationalism is the pathology of modern developmental history as inevitable as neurosis in the individual.  – Tom Nairn – ‘The Break-Up of Britain.’

Brexit and Trump have not suddenly happened. 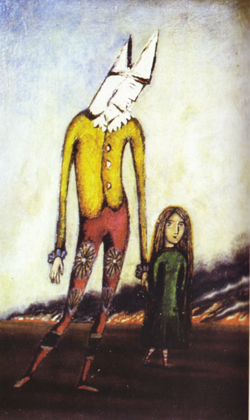 My generation has been outpaced by the frenzied speed of technological advances for some decades now. Large sections of society lack meaningful vocations and work, small shops and community centers are disappearing, since such places are no longer considered financially viable. Public services in Britain have been sold out. Liberal arts and crafts are reduced to soft and unprofitable educational choices. People have become exploitable commodities and are being gradually deprived of culture. I am reminded of Cecil Collin (1908-1989) and his ‘Vision of the Fool.’ For him, Saints, artists and poets are one with the joy and sorrow of the Fool, in whom the poetic imagination of life lives and coordinates heart-intelligence in human society. A cosmic folly that is present in the person of us, which cannot be exploited because it is above state, class or politics. It’s what I sense in many people I meet, a longing for what has been demeaned as useless – the poetic imagination of the innocent fool.

Western citizens should of course be grateful. We have progress, gadgets, toys – life has never been better. Yet the cornucopia of consumer choices does not replace human relationships, community facilities, lack of housing, lost jobs, lost pensions, does not prevent the gnawing disillusionment that is spreading like a virus, while beneath the impotent silence fester anger and self-destructiveness. When starved of meaning, what tends to make people feel alive, short of war, is upturning the apple cart and watching the unfolding drama.

Britain’s populist Brexit vote was valuable fuel for Donald Trump. He even called himself Mr Brexit – down with cosmopolitanism and multiculturalism – up with nationalism and walls to keep out the alien hordes. Brushing over complex issues with simpleminded slogans resulted in over 50 million Americans to vote on promises to make America great again by a man whose opportunist character will be severely tested by reality. Hopefully the task will mellow his character, and not result in toxic consequences for years to come.

For Britain, and other EU countries, there is yet an opportunity to re-evaluate the cards that have emerged on the public table. The Brexit referendum event gave food for thought, enough to serve the intelligent questioning of what truly lies at the heart of the growing disagreements and dissatisfaction among so-called affluent societies.

I guess I’m not the only one to suffer from Br -exasperation.

Not scapegoating, but a careful analysis is called for – and a constructive participation, with Europe, towards addressing the challenges of our time is what I wish for. The biases in the trail of globalism must be acknowledged and engaged with. The EU, despite massive failings, still offers the bests chance for stability. Turning the clock back is futile. In my view, to support and effectively influence the EU project is the intelligent way forward for Britain.

Stakes are high. Sanctioning the pathology of nationalistic frenzy could destroy what has been achieved. See the history of Human Rights.

Well, that’s my small voice in the internet wilderness. A post I wrote in 2012 may be relevant: