I’ve not been so happy for a long time, which I’ll explain later. Following a November without heating, I was 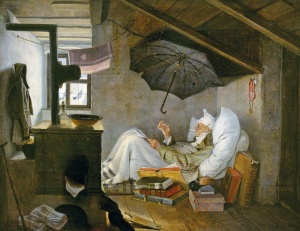 initially cheered by a brand new boiler and enjoyed a span of blissful warmth and hot showers. Turned out the new boiler’s sensitive mechanism couldn’t cope with the system. In my young days I used to be tolerant of temperature changes. Small groups of poor students occupied large houses that had a big stove in the kitchen and coal or wood fires in individual rooms. Halls, toilets, bathrooms were freezing zones. During severe winters in    Bavaria we used hairdryers to defrost our car engines. On the upside, our car tires had spikes in them, making driving on snow and ice brilliant and safe fun.

December brought two more weeks in sub-zero conditions. Attempts to write and edit with stiff fingers continued, helped by three pair of trousers, jumpers, legwarmers, wrist warmers, winter coat and hat. In addition I frequently refilled the hot water bottle on my knees to supplement the electric heater taking the chill off my back. Concentration was difficult, nerves frazzled. Baked chestnuts and hot lemon drinks brought a little warmth to my hands.

I dealt with government agencies that give grants towards new boilers, involving subcontractors, and more subcontractors. Bless them all, but among the experts I felt like a girl serving coffee at a conference table. The situation made me immensely grateful to have a home at all.

And being me, my mind went into a spin, considering the bursts of technological innovations during my lifetime, deceptively useful, miraculous even, yet challenging, never more so when it comes to integrate old systems with oversensitive devices and their narrow applications.

A mass of data doesn’t equate with intelligence, unless used with skill, heart, intuition and imagination. Artificial neural networks aim to emulate human potential that is only just emerging, be it the psychological understanding of the self in relationships, the impact of the unconscious psyche on our lives (as explored by C G Jung,) enmity or collaboration rooted in past experience, strange attractions, genius, intuition, creativity, attitude. A flow of fresh associations reach us from spheres that hold accrued knowledge. I like Pierre Teilhard de Chardine’s concept of a self-reflective noosphere.

Whatever one may call this sphere, white noise permeates it with a new brand of global wilderness. Beleaguered hive minds resist dialogue and integration. To use a lame metaphor, as a radio needs tuning to reach a required station, so a brain needs to be free of agitation to access harmonising frequencies.

I think of the physical brains as mediator, like the motherboard of a computer, or a radio. I hope future generations will be receptive to the body and find ways to relax it, so the brain can maintain the antennae to the psychic totality of the wisdom of our collective, non-local mind-being & its guidance, and not be misled by expectations that every pesky problem in daily life can be monitored and sorted by automated devices.

‘Long live the dead because we live in them.’ ― Clarice Lispector – A Breath of Life

From an old postcard I can’t source

AI intrigues, yet also brings our shortcomings into sharp perspective. Humans mirror the vast intelligence of the cosmos, through myth, art, religion, the insights of seers and scientists, all encapsulating equal measures of truth and untruth. If a higher will exists it must include the collective experience of a universal psyche, including yours and mine.

I must be free to make mistakes and form perception. Neurotic people muddle through. Old cars muddle through, old washing machines, ovens, fridges and boilers muddle through all manner of obstructions and, with a little devoted attention, can be mended until they have fulfilled their purpose. Life wings through seasons of existence in this limited material world, resurrected through other forms in further life cycles. Heck; imagine your experiential persona trapped indefinitely in a robotic body whose every need is monitored and anticipated. Imagination and the potential to understand another human being would wither away, the wisdom of aeons reduced to numbers. What a dumb and spiritless existence.

‘Technology, instead of liberating us from myth, confronts us as a force of a second nature just as overwhelming as the forces of a more elementary nature in archaic times.’ – Walter Benjamin.

I like my old car. It doesn’t lock me in or out, records my whereabouts, or suddenly cuts off its engine at a red light because its programme decides to safe petrol. I like devices that can be repaired with a little thought or the occasional bang of a hammer. I like my seasoned washing machine that doesn’t tell the world where and when I’m doing my laundry.

My old boiler pushed through the sludge in my pipes and could have been made to work again, with attention to the system. My rant is NOT about the new as such, but about the general dis-empowering trend that sells us short and prevents recycling of perfectly repairable items.

Each day we navigate unpredictable situations and complex problems. We feel the joy and pain of organisms, creatures, people, and often our reason is clouded by our passion. If only children were taught about emotional intelligence early on. Yet industries decree that trusting humans is risky, dangerous, and uneconomical. The story begins to resemble Mary Shelly’s Frankenstein. Not worth a thought of course, because Shelley was a woman.

Jeanette Winterson expresses similar thoughts more poignantly in a lecture she gave in Holland … Super intelligence could conclude that all mankind is a waste of space and resources. Check for a translate button on the site. I thank my Dutch friend, Kitty, for sharing this link on FB.

Yesterday I had brilliant news. A couple of competent plumbers took up some floorboards and, with impressive intuition, and skill, solved the problem. My new boiler is at peace with the old system.

Happy & warm, I want to share my pleasure with a festive offer on Course of Mirrors:

In addition, the e-book will be 99 pence on most platforms up to the 2nd January 2018

In case you enjoyed reading my magical novel, you may consider leaving a short comment on the above Troubador site (no signing in required) and Amazon, where it apparently boosts sales, which would be wonderful.

I’m wishing all my readers peaceful festive days and a blessed New Year.