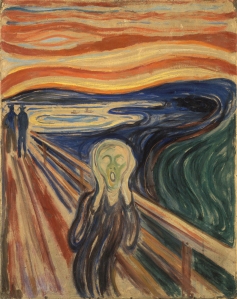 For me, Edward Munch’s painting  –  – The Scream —  sums up the fear of the unknown, and by implication, the fear of the feminine principle – a fear that spurns men towards controlling nature.

Hans Fallada’s novel, ‘Jeder stirbt für sich allein’ (Everyone dies alone,) first came to my attention through its publication in English, ‘Alone in Berlin,’ a translation that was delayed by 60 years. The book has been sitting on my shelf as a ‘must read’ for a long while. Burdened by regressive small-mindedness and divisions around the world, I finally tackled ‘Alone in Berlin,’ aware that it would be a grim read, having been described as a testament to the darkest years of the 20th century from the point of view and experience of ordinary people.

Resistance to the Nazi regime by individuals had no news value after the war. Yet such stories provide the most poignant insights into what it is like to oppose a state under a dictatorship. As such, this book, written raw and in haste eighteen month after the defeat of Nazism, offers a high alert to simple solutions for social problems. The author, Hans Fallada, aka Rudolf Ditzen, died before this last of his works was published in 1947.

The urgency behind the writing is palpable. The players, sketched with harsh strokes, embody the full range of human nature – the capacity for compassion, kindness, complacency, stupidity, meanness, stubbornness, false pride, envy, hate, and resentment, fear, fanaticism and vengeance tipping into the most depraved cruelty.

Very quickly the dread of being caught in the nightmarish system of a totalitarian state jumps at the reader. While the ghostly despot drifts in the background, his control is shown through the dynamic interactions of ordinary citizens – be they power-hungry officers, opportunists, cunning manipulators, cowards, reticent objectors or unsung heroes. Resistance carried the threat of death and seemed futile.

The anguish conveyed is chilling, intensified by the archetypal hue clinging to the tragic comic characters, at times suggesting caricatures. The sheer absurdness of the stupidities and sadistic cruelties depicted may dilute the shock, but it makes the scenes all the more heart-breaking.

The classic method of totalitarianism is to instil fear and divide factions of society against each other, so people spy on each other and nobody can be trusted anymore. In this chapter of history fear served as the leverage for forcing the banal idea of a perfect state that can be safeguarded through clockwork control.

Fallada’s main protagonists, Otto and Anna Quangel, were based on the records of two insignificant objectors to the regime, Otto and Elise Hampel. The elderly couple started spreading anti-Nazi missives written on postcards in buildings around Berlin. For their sadly ineffective attempts of rebellion, the Hampel’s were arrested in 1942, tried in 1943 and executed shortly after. The same fate befell their friends and relatives.

Can a few virtuous individuals, each driven by personal idiosyncrasies, redeem the moral integrity of a nation? It is up to the reader to decide whether the many deaths a totalitarian regime inflicts on soon forgotten brave people are in vain.

The book brought alive the pressure my grandparents must have lived under, as well as the uncanny anxious atmosphere that spoiled my parents’ teen years, and, the wariness I personally and many of the post-war generation developed towards overbearing authority.

Presented in the context of ordinary individual lives, the story reads like a tragic comedy that screams – let us never forget that freedom lies in people being allowed to be different, not chained to a hell of obedience and conformity.

Primo Levi’s declared ‘Alone in Berlin’ as the greatest book ever written about German resistance to the Nazis. English readers have had to wait 60 years to read the novel.