Drenched, we stepped into a steaming kitchen. A sizeable family was gathered for a meal. Men had spread their wet jumpers on chairs near the central cooker. In a nook above the table hung a plain crucifix. The matriarch served food. When she saw our bedraggled state, she dropped her ladle to fetch towels. We must have looked like scarecrows.

‘Sit down, have a bite.’ Her husband heaped roast lamb and spuds on large plates for us. A young girl gawked at our exotic outfit.  We were wedged into benches, flanked by men who, while bashful, beamed at the welcome distraction. As to goats – no luck:  ‘Ja Geissen, di hamma ghabt, aber jetzt nimmer. Dass tut mir Leid.’ The woman was genuinely disappointed for us.

Goats, we learned, were not bred anymore in the area. ‘The effort outweighed the reward,’ said an elder, though unlike the farmer earlier in the day, he did not make me feel a fool for wanting a goat. The brothers were curious and showered us with questions about the outside world, we were a novelty. Ellie kept quiet, struggling with her roast leg of lamb, out of politeness. She was undecided about eating meat. Playing the martyr, I thought. A good hour passed with stories in local dialect. I caught the gist and laughed along, while Ellie occasionally managed the ghost of a grin. When the deluge reversed to plain rain, I grasped the moment to thank our hosts.

‘You could ask the cobbler in the village. He’s privy to gossip from round here.’ The elder chuckled. ‘You’ll find him in the village, next to the church.’

Guided by the baroque spire, I found the church and parked the car in the square. Two crows cawed, debating in a spindly tree. ‘A bad omen,’ Ellie said.

I was gripped by a compulsion to let her hitchhike home. Her foolish superstition annoyed me. ‘All depends what you project onto crows,’ I countered.’

A lean and nifty man, the cobbler stashed not only shoes but secrets, likely for profit. There was punch behind his words, ‘Your best bet is the slaughterhouse,’ he said, ‘they might have an old goat.’

‘I don’t want to go there.’ Ellie wailed. Her moral conflict over eating meat at the farmer’s table left her feeling woozy. And the crows had put fear in her. Wet through once more, we lingered in the car and gazed at the waters dancing on the tarmac. ‘Maybe you should get a sheep,’ Ellie said.

I suffered the humiliation of defeat, while the slaughterhouse loomed as a last resort. My want for a goat prevailed. ‘I’ll enquire, you can stay put,’ I said, and firmly started the engine, heading in the direction the cobbler had indicated. Another black cloud sailed in. The torrent drummed so hard on the windshield, its wipers slowed under duress. Single drops hit the tarmac like missiles, forming a milky mist. 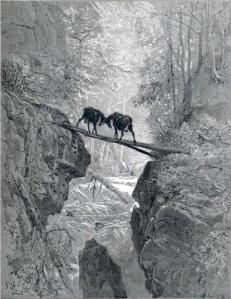 ‘Everything’s against us,’ Ellie said. Here we go again, I thought. Yet I had to admit the dead-end. We would have to return down the mountain. The trouble was, when Ellie slipped into a low mood the air surrounding her became heavy. If I stretched my imagination I could see her succumb to a host of dark entities, hear their whispers. I regretted my decision to take Ellie along. We turned a corner, and, without warning, were faced by a stark scene. In the frame of an open industrial unit animal corpses dangled from hooks like pendulums. That instant a cow’s belly was sliced open. Blood and inner organs poured out and splashed into the drains below. Ellie shrieked and paled. Queasy myself, a vivid taste of iron in my mouth, I turned the car and stopped on the main road.

Numbed, we avoided each other’s eyes, the shocking event lingered. Part of life’s food chain, I told myself, and promptly pictured the cling-filmed bloodless meat in supermarkets.

Ellie heaved a breath. Her hands stopped trembling. She shook her head, ‘Nevermore,’ she said. The gravity in her voice, the burning determination in her eyes, hinted at a deep rage, way beyond her revulsion to meat. It seemed to me her nevermore applied to the shadowy entities that plagued her, and a no-meat pledge served to conquer her passivity.

I liked the taste of meat, but would I eat it if I had to kill the animal myself? A challenge! I reasoned with my conscience and came up with a compromise. ‘From now on, I’ll remember to honour a sacrificed life with a thank you,’ I said.

‘That’s a start.’ The sharp tone behind Ellie’s new credo brought an icy draught on the air. To escape the depressing spot, I made snail-speed through the village. The day’s span had narrowed. Overcome by failure, I gazed into the haze for answers.

… a link to part three, the last instalment is at the top of this page …

The only true wisdom is in knowing you know nothing. A wise man does not need advice and a goat won’t take it.   Anon

The illustrations are by Arthur Rackham and Gustave Doré