… my memory of the moon landing …

News reminds me that today is the fifties anniversary of America’s moon landing.

I was in Prague. My then companion, for his birthday celebration, had organised a small group of friends to spend a weekend in this beautiful city, coinciding with the moon landing. We could afford a 5 star hotel, due to a bargain currency exchange rate in the wake of the short-lived Prague Spring … the invasion of Czechoslovakia by members of the Warsaw Pact, and then the country’s occupation. We found an eerie hush hush atmosphere, but once rapport was created, people were keen to treat us cash-spending visitors like royalty. Hotel staff attended to our every need, insisting on polishing our shoes overnight. Restaurants, beyond serving exquisite goulash, entertained us with stories and life music. Our luxury was tinged with sadness. These people had had a rough time. It would take many more years before the collapse of Communism. 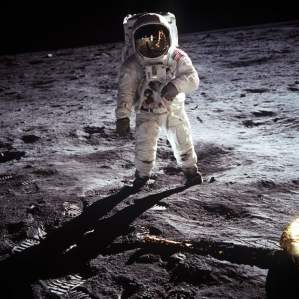 Buzz Aldrin walks on the surface of the moon. Photograph: NASA

We watched the moon landing on a black & white TV in the lobby of our hotel, outnumbered by American tourists. The atmosphere was electric. All our eyes were glued to the small screen, witnessing the eagle’s landing, feet stepping down the ladder into the moon dust. And them Armstrong documenting Buzz Aldrin imprinting the dust with his heavy shoes. Given the lack of air-movement on the moon, these imprints may still be there, unless the later take-off erased them.

We took in the iconic exclamations … one small step for man, one giant leap for mankind…

Americans around us burst into high decibels and fell into each other’s arms for joy. So yes, it was a memorable moment, and, without doubt, a magnificent achievement for the visionaries, like J.F. Kennedy, who sadly missed the event, and the many thousands of technicians and supporting staff involved in the project.

However, for me it amplified a more significant image from the year before, a photograph called ‘earthrise.’   I sincerely hoped that beholding the wonder of this beautiful planet floating in dark space would widen political perspectives and bring people’s consciousness around the world to the realisation that we are in this adventure of life together.

That weekend in Prague, I visited the old Jewish cemetery. Stirred by a brilliant slanting light, I took a series of b&w photos, only to destroy them later, incl. negatives. (The scene became incorporated in my novel ‘Course of Mirrors.’) I regret the loss.  The photos were stunning.

Wars, atrocities and poverty continued, nothing changed. Technological progress only worsened injustices. Protesters during the moon landing proclaimed “Billions for space. Pennies for the hungry.”

I came to the conclusion that the exploration of deep space requires the balance of another exploration … a deep exploration of the human mind. A befriending of the unconscious, the objective psyche, which we can’t control.  The latter study inspired my subsequent vocation.

I grew up with this lullaby, my favourite …

Click here for the whole text with notation, and translation …

What do you do there, moon, in the sky? Tell me what you do, silent moon … Giacomo Leopardi