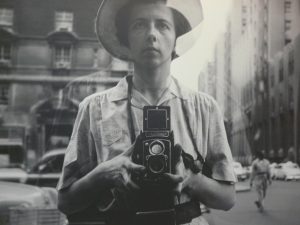 A self-portrait of Vivian Maier

In 2007 a photographic archive was auctioned off to recover debts for storage rent. Most of her life Vivian Maier (1926 – 2009) worked as a nanny. In her free time she recorded what caught her eye, predominantly in the streets of New York and Chicago. She captured poignant moments, like soul mirrors, in brief encounters. Read the tale of how her archive was discovered and the puzzle of her life was assembled HERE

It is my guess that, while she was without means to have innumerable film rolls printed, Vivian Maier distinctly memorised each unpredictable encounter she captured. What makes me think so? 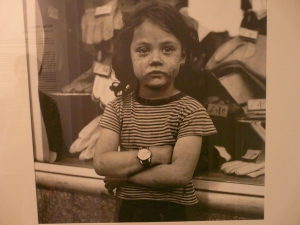 The memory of defining and framing something on the move is powerful, with or without camera, though a creative record helps structuring and symbolising our perceptions. During the 70s, when I worked as photo-journalist, using analogue cameras, a Rolleiflex, like Vivian, but also Nikons, and a Hasselblad, I never wasted film. Each image was taken by choice.

Certain frames live on in my memory as iconic elements, and I recall the exact instant when I pressed the shutter, encapsulating something of essence.

A number of years ago I lost three 35 mm film-rolls on a plane from Berlin to London. I thought they were secure in my make-up bag, but the bag slipped unnoticed down the seat and I never recovered it. I mourned. It was the first time I re-visited Berlin, my mother’s city, since I was 7 years old.  Yet the images I took in Berlin and of the friends I travelled with are still crystal clear in my mind.

I recall the massive amount of negatives and prints I burned at an earlier point in my life, not to be burdened with storage, not to sit on my laurels, and for other reasons – profound stupitity, I know,  a self-destructive streak haunted me at the time. The vanished portfolio is now a secret hoard lingering in my memory. It is also a scene in my mythic poetic novel, still awaiting publication.

The story of the discovery of Vivian Maier’s secret archive grips the imagination. Why? Maybe because we all yearn to evidence our existence. Even if only one person holds up a mirror of approval, can GROG us, we are affirmed.

With the cornucopia of individual creativity unleashed through the new technologies of recent decades, the chance of public recognition is fickle, sponsors look for novelty, notoriety, eccentricity, looks, hard elbows …  A good deal depends on timing, and luck.

Yet no individual perspective is alike. The passions we pursue in communion with what we encounter inside, outside, our search, our uniqueness, is forever in need of expression. We want to be witnessed for the coherence and ingenuity of our individual world, our deeply felt values, skills and insights. And yet – I heard it said – if Einstein’s equation of relativity had never been published, it would still have influenced and shifted the collective consciousness.

I deduct that since we all benefit from the inspirations and inventions of individuals who may never have received credit for their genius, their life’s work, and since nothing is ever truly lost (I believe,) there can be solace in our giving, be it acknowledged or not, while we keep on the lookout and ready ourselve for a glimpse of the beloved’s curl.

And of course, nothing prevents me, or you, from expecting miracles 🙂