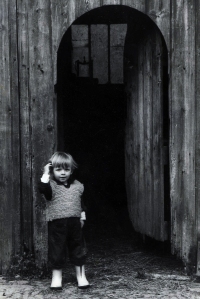 Pots done, I attended to the next task, fetching the milk from the street-hatch, left there by Hope, our farming neighbour. She had poured three pints of milk into a bowl and covered it with a cloth. The cream had risen to the top, ready to be skimmed off, which led on to the next task, preparing the dessert for a birthday meal. At this point my son came rushing into the kitchen, wanting me to witness and applause his new sharp-shooting skill. My brain cells were committed to preparing walnut ice-cream.

This trick normally worked for a while, but that day he stood his place, watching me with a quizzing look.

‘When does now end?’ he asked.

Casting my eyes to the ceiling for help, I said, ‘Actually, now never ends,’ realising instantly I was in trouble. The child’s superior grasp of logic would demand, at least, a meaningful explanation, and I could loop myself into philosophical twists. My son had no need to query my shrewd answer, he went one better.

‘So when does later start?’

Time to admit defeat. Drying my hands, I said, ‘Now.’

Now is the in-breath

Now is the elusive arc

Now is the outbreath

Out of nowhere pops the now

Or so we presume

When will we find you?

Why not tell us your purpose?

Where are you hiding?

Now is a trickster

Not taken in by mind-games

Now laughs inside us

Our time must be round

Or turn through a dark tunnel

Waste now and lose her

Wed now and be her

Now has no answer

Now is what is truly known

Now breathe her and bow

A focussed mind helps us to achieve stuff, but is also easily hijacked by the rat-race, the relentless rush towards meeting deadlines in competitive environments, where no children interrupt and make us pause.

There is another kind of stress, less talked about, affecting those who work hard for a living, as well as those who lost jobs, or get by on little, or anyone reflecting on human qualities, while witnessing a growing social polarity … as poignantly shown in this image …