… the recycling of unease …

Merciless downpours – I occasionally dash between strings of rain to trim the green jungle in my garden and pick a handful of wild strawberries. Tonight, looking east, the sky is grey. And not a leaf stirs, due to the full moon. In the next room a brilliant sunset reflects in a glass-framed painting. And as I look east again, a high cloud is blushed in rose-colour. More rain announced. It is the wettest summer in my many lifetimes, of late a tumultuous time. 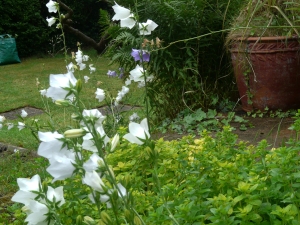 I was indirectly affected by a trauma, not mine, not my story to tell, though I’m proud of two dear young people who dealt admirably with the fallout of having their flat in London broken in. Several flats in the same block were crashed into with crowbars within the span of two hours and in bright daylight. Picture the scenario: you leave your home for a short while and return to find your front door broken and all means of communication, including the creative tools needed for your livelihood – gone. The logistics of solving the problem are, to put it mildly, overwhelming.

I bemoan the motherly welfare state and the infantile moral consciousness it feeds. I observe signs in my relatively crime-free little town. As an illustration, the other day in a car park I observed a woman tossing an empty plastic bottle from her car- window before she drove off. Her children in the backseat looked on. What motivates careless behaviour? What jumped to my mind – probably a negative mother (state) dependency, a resentment of mother’s permissiveness, having being patronised and cheated out of meaningful relationships and been entranced by the material world.

Next day I visited a car boot sale in search of world-objects for my sand tray therapy work. A young girl spilled coins from her purse over the stall while paying for a trinket. A few coins fell to the grass. A boy behind her casually covered one of the coins with his foot. He didn’t even smile at his clever trick. His face was blank. This chilled me. Without parents to model self-respect, how will children become psychologically independent individuals? 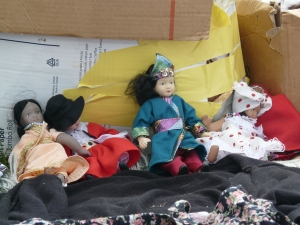 We all experience the acceleration of change. The changes in my lifetime eroded structures of meaning that carried values I held dear. Change is however the only constant. Navigating change without straining our nervous system and by implication the nervous system of our planet is a challenge that requires an attitude of self-respect and tolerance: the ability to bear contradiction and confusion.

While collisions of mythologies storm all around us, we have the elation about the Higgs particle, indicator of a Higgs field. The single-minded work of a scientific community including 20 member states is remarkable, I’d be proud to be part of it. But wait, many more billions will now be spent on search for super symmetry (SUSY).  Imagine what could be achieved if even a tiny portion of this budget would go towards exploring the autonomous postulates spouting from our collective unconscious, in other words, exploring the underlying structure of the human psyche, of which the visible particles populate our dysfunctional societies.

Light is both particle and wave, and though we can only observe one at a time it is one light.

What In The World IS A Higgs Boson?

An interview with Dr Lisa Randall, from last year but more informative

6 responses to “… the recycling of unease …”