Fallen angels being such a wonderful subject – had I been black, and a talented musician with total passion for jazz, I’d have joined Sun Ra’s Akestra. He was an intense and fascinating man, one of those people who move through chaos to get to harmony, who have their pulse on the future. They tend to attract a select fellowship. Tuned into a novel wavelength, they enjoyed an accelerated period of growth together, a hell of a time. 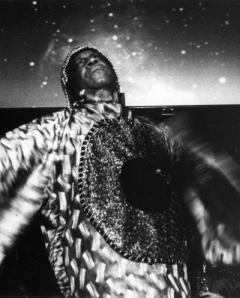 With his experiential musicians, Sun Ra expanded the bandwidth for the performances of his cosmic vision and shared the breadth of his trickster consciousness with a larger audience, exemplifying a crash course in creativity.

You might like to watch this excellent BBC documentary by Don Letts. Sun Ra, Brother from another Planet:

Listening to musicians and friends who worked with Sun Ra, I noticed how they respect each other, all through the elation of creating a fresh sound-language. One interviewee remarked on Sun Ra’s urgency, his alacrity, another quoted him: ‘Are you going to be replaced by a button? If you can do THIS you always have a job,’ you might not make any money but you have a job.’ Everyone in their way confirms Sun Ra’s genuineness, his seriousness, and his humour. He was a catalyst. His compositions were often off-chord, which some found off-putting, couldn’t get into.

It’s a sound form other spheres  that transcends known categories and opens new horizons. I love the saxophone doing what it can do, almost playing by itself. And I love the glittering hats of the musicians.

Here’s the early cult movie – Space is the Place – from 1974 – The mystery of Mister Ra. http://www.youtube.com/watch?v=NwNtxFH6IjU&feature=fvwrel

Sweet show of a joker, the film shows a mythological duel between Sun Ra and The Overseer, between an angel from Saturn and a fallen angel.

‘You just want to talk about realities, no myth.

Well, I’m the myth talking to you.’

The photo of Sun Ra with June Tyson

Is by Michael Wilderman