In rural Spain the young people leave for the city to chase the future. Houses crumble in the hills where the past is guarded by the older generation, or so it seems. When families shrink the olives stay where they drop, and nothing sells without a brand.

Some brave souls, like my friends, Harold and Agnieszka, return to the land and make self-sufficiency into an art form – a beautiful ecological haven where water comes from a well, food from the land, and the sun’s light and heat is captured to provide under-floor heating, as well as casting an iridescent haze that cheers the heart and bronzes the skin. 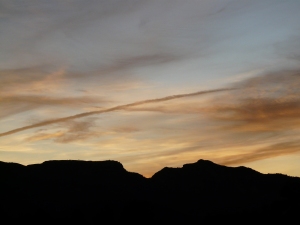 Total calm descends during late afternoons, when the sky becomes a canvas to all colours and darkens to night, sparkling with deep layers of stars invisible to the city folk. In the blink of an eye the world appears again in a new gloss of day.

Harold pondered on the slow, enduring movement in circular time, recalling the other life we all know too well, where the measure of things completed is treasured before we rush on to the next project.

Both qualities of time, circular and linear, have their beauty. 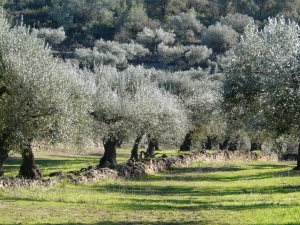 As I walked in the olive groves, a  thought popped up – followers follow those who feed them. Could one be neither follower nor feeder (leader)? Would this bypass nature’s law? Like resting at the centre of the grindstone and not be crushed? Would it be living like a beggar receiving what is surplus and freely given? Like where presence alone illuminates the heart in which peace abides blessed by the invisible source. There are such states, tiny escapes, small eternities, in-betweens, unexpected gifts of nothingness, when the world stops to laugh at its beautiful mirage. 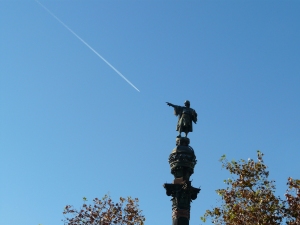 So here we are, after Christopher Columbus, standing now proudly pointing at the horizon beyond Barcelona’s harbour, while a plane comes in tickling his finger, he who at one stroke widened and shrunk the world with his vision. Would he want to play with this shape and time-shifting capacity? What territories would he explore today?

Returning through Gatwick I had a tantrum. I rarely have tantrums. How it happened that I landed in a queue of people who (presumably) volunteered to undergo an iris-recognition-test I can’t recall. 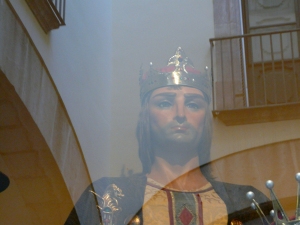 This is the future, where you walk through a cubicle and look into a mirror that reads your eyes to establish whether they correspond to the photo in your passport. Each unique individual becomes data enshrined for their lifetime and beyond. I sabotaged the process for several irrational sentiments. Who wants to look straight at their exhausted mien after hours of queuing and ignominies  at an airport? I hated the intrusion – eyes being the mirrors of the soul – and, I figured, thousands of jobs will be lost since scanning passport and eyes alone will herd the masses along.

I found myself in the cubicle avoiding the mirror, which meant the stupid gate remained closed and I was trapped. The official encouraged me repeatedly to look directly into the mirror … I blinked frantically … of course the gates refused to let me through. Finally I stomped my foot like an angry toddler and consequently was allowed to pass through a human gate.  In that instance I powerfully grasped the indignities and the dehumanising experiences so many people had to endure and do so continuously, being sifted by whatever power resides, experiences I was spared all my life. And this is me, who am normally fairly open to new technological inventions. Is this my limit regarding progress, or do I sense an issue here,  a host of abuses that potentially lie in the wake of artificial eyes … ? What do you think?

Here are some images from my week in Spain …

6 responses to “… circular versus linear time …”