I recently walked through an antiques warehouse looking for a present and kept meeting the same two women. One did the talking, dropping names of capitals from around the world, where she was last week, where she was going to be tomorrow, how she would meet up with so-and-so and what had become of so-and-so. Her friend, slightly less classy, walked a step behind, listening. During my tour of stalls I met the pair three times and each time the globetrotter’s monologue spun on like gerbils do in a wheel – more capitals, more exotic locations, more gossip about affluent associates …

My interest went as far as wondering about the placid listener. Next I stood behind the women in a queue, waiting to pay. There had been a commotion. A crystal (glass) skull had broken into myriads of bits. Surreal, I thought, and became attentive to the scene. 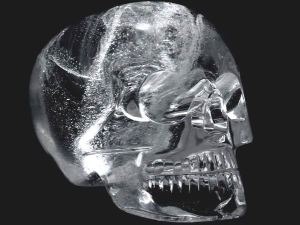 This Crystal Skull can be found in the British Museum, apparent source: Mexico. It’s a fake, though the myth about Crystal Skulls is well alive, with some pertaining they were intended as a form of computer that records energy and vibration that occur around them …

A sales girl vacumed the carpet before the cashpoint. The delay seemed stressful to the classy woman. Her monologue stopped. Instead, she scrutinised the girl doing her cleaning dance, looking her up and down, eyes frequently coming to rest at her bottom, followed by a mien of displeasure and subtle head-shaking as if her sense of aesthetics was offended.

My interest increased. I had disliked my bottom when I was a teen. It turned pear-shaped whereas I wished it to be, oh I don’t know, apple-shaped. My parents didn’t give me this complex. I reasoned later the sudden break in my intensive sport activities eventuated the phase. So I stood there thinking, heck, there is nothing wrong with the girl’s bottom. The classy woman seemed to have very high standards of style, or irrational fears of imperfection. Modern dress sense being what it is I, too, catch myself gasping at wobbly bottoms revealed by leggings. But the bottom of the young woman was firm and unique.

The sales girl went about her job in a graceful and efficient manner. She seemed oblivious to the disapproving stares, though something must have registered, her movements became slightly awkward. And then it happened … she toppled a wire stand and hundreds of cellophane wrapped greeting cards slithered all over the floor. Dissonance – go figure.

Why am I sharing this incident? Apart from the cultural imperative of a perfect shape imposed on women, and perpetuated by women, involuntary labelling tends to shoot down everything that falls short of ideal means we hold up for ourselves, personally or socially. Unconscious mirroring, as useful as it is to the evolution of culture, also fixes attitudes and beliefs, disabling and limiting us.

Without the ability to self-reflect and challenge habitually thoughts, committed brain cells run the show below our awareness, especially when we feel stressed. The term, ‘mirror neurons’ may be new but the concept of reflection is well known, in that we are connected through what we hold in the mirror of our heart. I know, I know, it’s my pet subject. You find it hinted at throughout my site here.

Within the last decades technology produced a global mirror, you are looking into it now. And what a teaching it offers … every thought gains speed in a play of probabilities. Attitudes and beliefs lift beyond our backyard, they go viral at the push of a button, and, significantly, become visible. With awareness, we are not automatically compelled to react. We have a choice not to be hooked into projections, and a choice how to respond. It becomes clear that each one of us has an influence …

If you are interested in the fascinating subject of mirror neurons, here is a link:

VS Ramachandran … I do love the way he rolls his RRRs