The fourth sequence …  not the last yet … if you like to read the whole story so far, scroll down the page to part one.

Silence contains an ocean of possibilities. The silence between us churned with muffled presences pushing up for light and air. Breaking into the old woman’s secret tabernacle had been wrong, and yet, curiously apt. I felt the same inevitability when I saw the house for the first time. Words buzzed in my mind, vying for attention, wanting out. I took a risk. ‘They’re masterful paintings,’ I said, ‘and deeply stirring.’

She faced me, the stranger mirroring her grief. And, as if she craved the occasion to share this burden of her conflict, tears came, unchecked. I helped her to a chair.

‘Esta bien?’ the agent called from the bottom of the stairs, probing, to allay his unease.

‘Toda esta bien,’ she sobbed, ‘espere en el coche.’ She sent the man to wait in his car, and added, to my amazement, ‘Dejame en paz con mi angel ingles.’ I had been called many things before, but never an angel. She pointed to the cardinal. ‘Los Rojos … fue asesinado.’ There was no anger in her voice, only sadness. From what I had read of events during the Spanish Civil War, and the Red Terror, the cardinal must have died a terrible death. 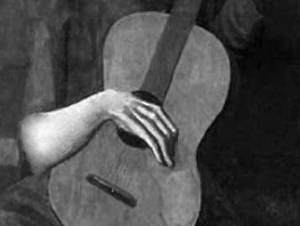 I pulled up a chair and gently touched her back, picking up a dull quiver, as from the neglected body of a guitar that lacks timbre. I had met women and men trying to come to terms with incestuous compulsions, victims and perpetrators, yearning for spiritual love. Some never strike the right note to connect heaven and earth, like the cardinal, a child-man, who sought innocence and destroyed it.

‘I was a daughter to him. He spoiled me.’

‘I went to live in London when I came of age.’ Sensing my tolerance, she said, almost inaudible, ‘I worked there for many years … in a nightclub … until I met my love, Antonio.’

‘Yes.’ She reached across the table for an object wrapped in black silk and unpeeled a small canvas. Her fingertips traced over painted brows before she handed me the mediocre portrait of a sombre man, whose eyes were nevertheless genial, even humorous. ‘Not a good likeness, I can’t paint well,’ she said. ‘I only copy surfaces. He was the artist. He perceived through the heart.’

‘You caught his spirit,’ I said. ‘As for his brilliant art, you allowed him to see your truth, in that place where betrayed hearts waver in a limbo of doubt.’

‘Yes, you understand. His seeing helped me endure the contradictions. Still …’ she looked through fresh tears towards the painting of herself in the shadow, ‘… the past ensnares.’

On impulse, I held the candle to the woman’s naked image among snakes and noticed what I had missed, the slight bulge of her belly.

‘I told Antonio of my years in London. How I got myself pregnant and gave birth between the pews of a church. How I couldn’t care for the girl and never heard what happened after I left her on a bench,  clean, wrapped up warm, with a name written on her belly, Juanita. Later, there was nothing about the event in the news. Nothing, as if she never existed.’

In my ears rung the refrain – she never existed. Thoughts raced. I had been abandoned, and was adopted. My mother found me in a chapel near Basing. No other woman ever claimed me.

She sensed my distress and misread its source. ‘St Patrick’s Church was a safe place. There was no 0ne I could trust. My work in London was illegal.’

A nauseating sensation of floating made me clasp the frame of my chair. St Patrick was mother’s favourite saint. My parents moved from Soho to Hampshire when I came into their lives. Before I knew of my adoption, father once remarked about a streak of Spanish blood in his family, to justify my dark hair.

The woman looked forlorn, gazing inward. ‘It’s a dream I must let go,’ she said.

Palms sweating, I likened myself to the woman before me, her intense blue eyes, and the shape of her forehead, elongated fingers … ‘What year was it?’ The question burst out involuntarily. Embarrassed, I added, ‘Sorry, it’s none of my business. I shouldn’t pry.’

She absorbed herself in the layers of cracked paint coating the floorboards. ‘I think it was the year this man, Armstrong, stepped on the moon with the wrong foot.’

‘The left foot! It was on TV…’ She looked up. ‘Or maybe it was the year before.’

Hysterical – comedy and tragedy blurred. She couldn’t even remember the year.

A genuine concern in her voice made me respond, ‘I was adopted in 1967.’ Wasted words, she had not heard me. Lost in a faraway place, she said, ‘So long ago.’

My anguish finally caught her attention. She pressed my hand. ‘What’s wrong dear?’

I had started this madness with my fixation on the hacienda. I raised the stakes with my blind bet on the semi. And now I pledged my heart on a wild speculation over my birth. The senora’s recall was nebulous, as through a misted glass. My hope was based on nothing but fuzzy coincidences. And the dots I was joining up might yield no more than bizarre scribbles, but it was too late to quit. The dim studio space with its little stray light and the lone flame of a candle had become a womb. I wanted the shutters open. As my chest tightened with apprehension, I jumped to my feet and walked round my chair. Catching my breath, I braved the truth. I faced the old lady and filled in my fantasy:

‘Imagine a woman after a string of miscarriages. She finds Juanita in St Patrick’s Church and thinks her favourite saint granted her prayers. She whisks the infant off to a chapel in Hampshire to blur the trail in case the birth-mother has regrets … I was adopted and called Jane. My birth certificate shows 10 July 1967.’

The senora swallowed her breath. ‘A mi Dios …’

Her exclamation was one of mild surprise. Nothing. No heart-rocking epiphany, no jubilant outburst, no falling into each other’s arms. No … something was terribly wrong …

On more instalment at … https://courseofmirrors.wordpress.com/2012/02/18/lap-of-fate-part-five/